Current technological developments in manufacturing are likely to lead to a partial reversal of the wave of fragmentation and global value chains that was at the core of the rise of North-South trade from 1990 onwards. At the same time, China – the main hub of the global-growth-cum-structural-change of that period - may attempt to extend the previous wave through its “One Belt, One Road” initiative.

Production and trade globalization thrived from 1990 onwards (Canuto, 2016). The removal of barriers to trade and technological advances that led to reduction in trade and communications costs ushered in years of sustained trade expansion. The decline in the costs of shipping goods and of managing complex production networks allowed the vertical and spatial cross-border fragmentation of manufacturing within highly integrated global production networks or global value chains (GVCs), where large swaths of lower-wage workers from Asia and Eastern Europe could be combined with the use of technology managed across borders.

GVCs facilitated a process of growth-cum-structural-transformation with substantial total factor productivity increases in the countries wherein the foregoing GVCs were incorporated. Foreign trade was instrumental for the substantial movement of population from low-value, low-productivity activities to the production of modern tradable goods. China represents a special case both in terms of speed and magnitude (Canuto, 2013) (Chart 1). High global GDP growth took place with an increasing weight of non-advanced economies, which helped to spark the commodity super-cycle in the 2000s and a transmission of global dynamism to natural resource-rich countries (Brahmbhatt and Canuto, 2010).

There are signs however that such a strong wave has reached its peak. The elasticity of global trade relative to global GDP has been dampened by more than what circumstantial post global financial crisis (GFC) trade-dampening factors would suggest (Canuto, 2016) (OMFIF, 2017). Given the state-of-arts of manufacturing technology, unbundling and fragmentation of production processes may have approached a plateau. Furthermore, the scope for export-led hyper-growth has narrowed as the pattern of current-account imbalances prevailing prior to the GFC is unlikely to return  (Canuto, 2017). 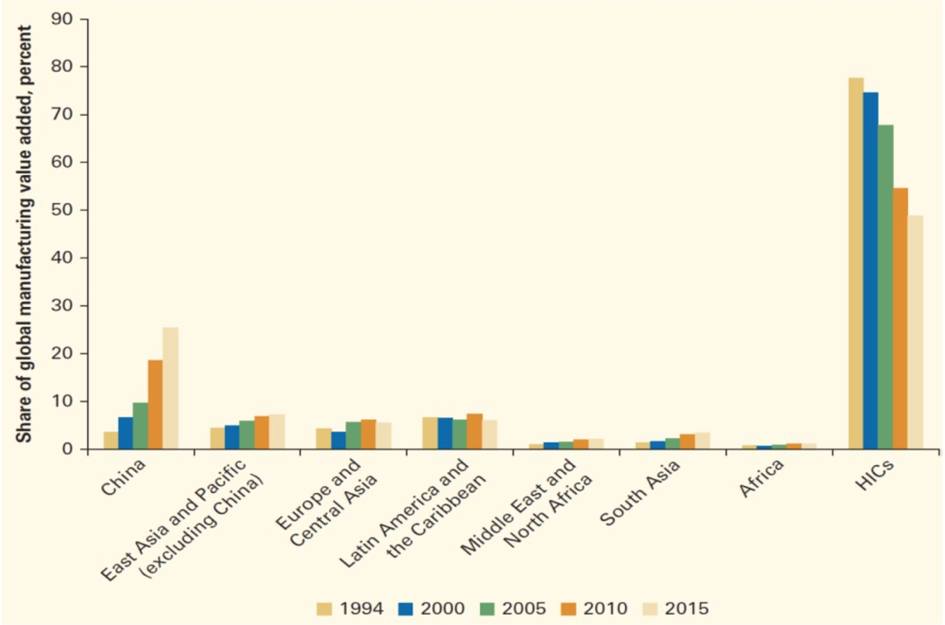 The directions taken by technological trajectories and aggregate demand in advanced economies seem to point toward a broad alteration of the balance of locational advantages for production fragments, decreasing the weight of labor costs and augmenting the relevance of local availability of complementary intangible assets. As approached by Arbache (2016) and Hallward-Driemeier and Nayyar (2017), Industry 4.0 is labor-saving, particularly on the content of unskilled labor. Customization of products is raising the relevance of proximity to markets over production costs. Domestic consumption and GDP in advanced economies are “dematerializing” as a reflection of technological changes and the higher income elasticity of demand for sophisticated services. These and other trends suggest that a double whammy on production and exports of non-advanced economies may take place: a partial reversal of off-shoring and a slower growth of outlets for their typical exports.

While the limitations on extending, or replicating the manufacturing export-led, fast-growth experiences of the recent past are clear, the ultimate impact of those trends on local production is less so, for reasons pointed out by Hallward-Driemeier and Nayyar (2017). As an illustration, if local income in non-advanced economies can expand for push factors other than foreign demand for manufactures, and new technologies – as it may be the case with 3-D printing - turn out to be scale-reducing, rather than scale-enhancing, one may watch the emergence of geographically disperse “micromanufacturing” activities. Population increases, urbanization and poverty reduction may entail the maintenance of strong domestic demand for manufacturing goods in the future ahead.
Of course, it must be acknowledged that investments in appropriate infrastructure, training local technicians and enhancing business environments – e.g. property rights - to reduce transaction costs and risks are preconditions:

The authors also showed in detail how “the manufacturing sector is not monolithic (…) and there is heterogeneity in [the] employment-productivity-trade space” across subsectors ( p.17) (Chart 2). As new technologies are affecting those subsectors at different paces, there will remain a – although shrinking – range of entry points for producers with low wage costs and sound business environments. 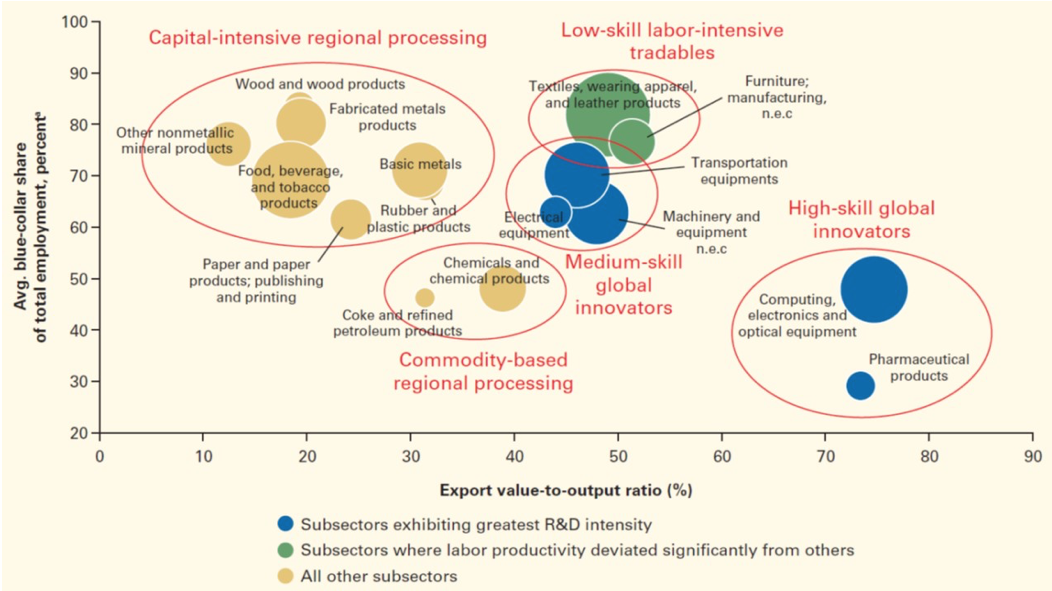 The bar in terms of local requisites of infrastructure, labor training and soundness of business environments in non-advanced economies is being raised. And that is a precondition for keeping growth and avoiding the income gap relative to advanced economies to yawn, now that the East Asian type of spectacular manufacturing export-led growth seems to have become harder to obtain.

China is leveraging while rebalancing…

China has initiated a rebalancing toward a new growth pattern, one in which domestic consumption is to rise relative to investments and exports, while a drive toward consolidating local insertion in GVCs to move up the ladder of value added is also to take place (Canuto, 2013). That rebalancing has been pointed out as one of the factors behind the recent global trade slowdown, given China’s weight in the world economy and a recent trend of import substitution (Canuto, 2016).

China is in a league of its own and its rebalancing-cum-upgrading will condition other emerging markets and developing economies. If it lets low-skill labor-intensive manufacturing activities go, a new wave of further GVC dislocations might open opportunities for countries currently endowed with cheap and abundant labor – under the overall global conditions outlined in the previous item. On the other hand, the densification of local parts of GVCs will represent a competitive challenge to medium-range manufactures produced in other middle-income countries. The net result will also depend on the leakages outward of its domestic demand as it rebalances toward a more consumption- and service-oriented economy. It is worth highlighting that China has already begun an attempt to leapfrog to new technologies as one can gauge by the pace of increase of operational stocks of industrial robots in manufacturing (Chart 3).

China’s exceptionality in terms of size and speed of growth-cum-structural-transformation in the high era of GVCs had a counterpart in terms of ultra-high investments and export ratios to GDP. The transition toward a less investment- and export-dependent growth model has been taking place from a starting point of very low consumption ratios (Chart 4, left side). Besides high ratios of profit to wages, low levels of public social spending lead to high household savings (Chart 4, right side). No wonder rebalancing toward a consumption-based growth model was expected to be gradually pursued or otherwise GDP growth rates might collapse, rather than slide down from two digits. The change of growth pattern is requiring time-intensive structural reforms.

Furthermore, like elsewhere, fears of a quasi-collapse of the global economy in the aftermath of GFC were followed by countercyclical policies. In the case of China, a “Great Quantitative Easing (QE)” took the form of a combination of “shadow banking” and capital expenditures on housing and infrastructure, with a high role played by special purpose vehicles (SPVs) associated with subnational entities (Canuto and Zhuang, 2015). Restraints have occasionally been applied but the attainment of official target growth rates has been accompanied by overcapacity in some heavy-industry sectors as well as increasing debt leverage (Chart 5). Chinese authorities have announced their intent to dampen such trajectory before vulnerability to a sudden stop reaches any critical point. 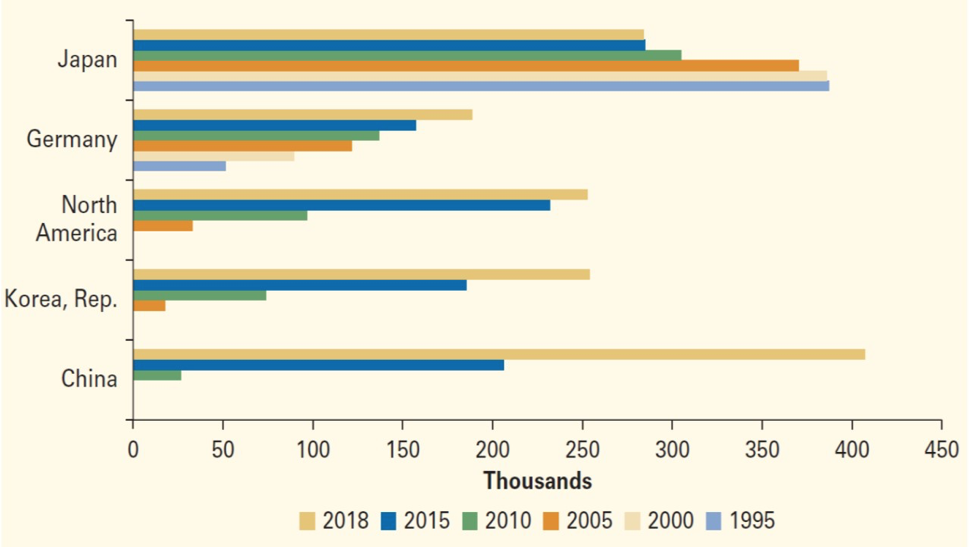 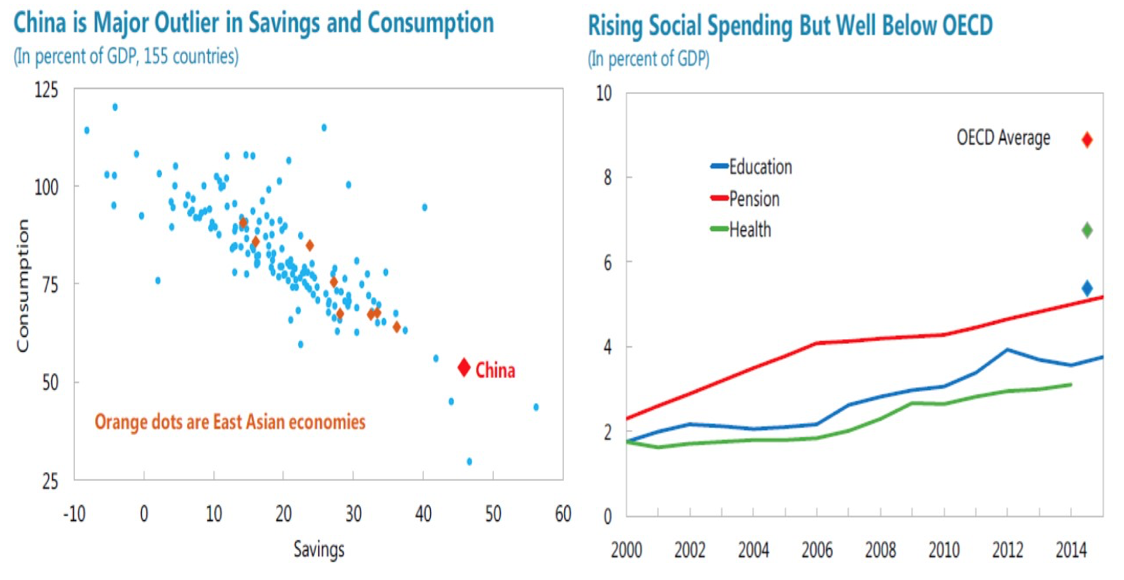 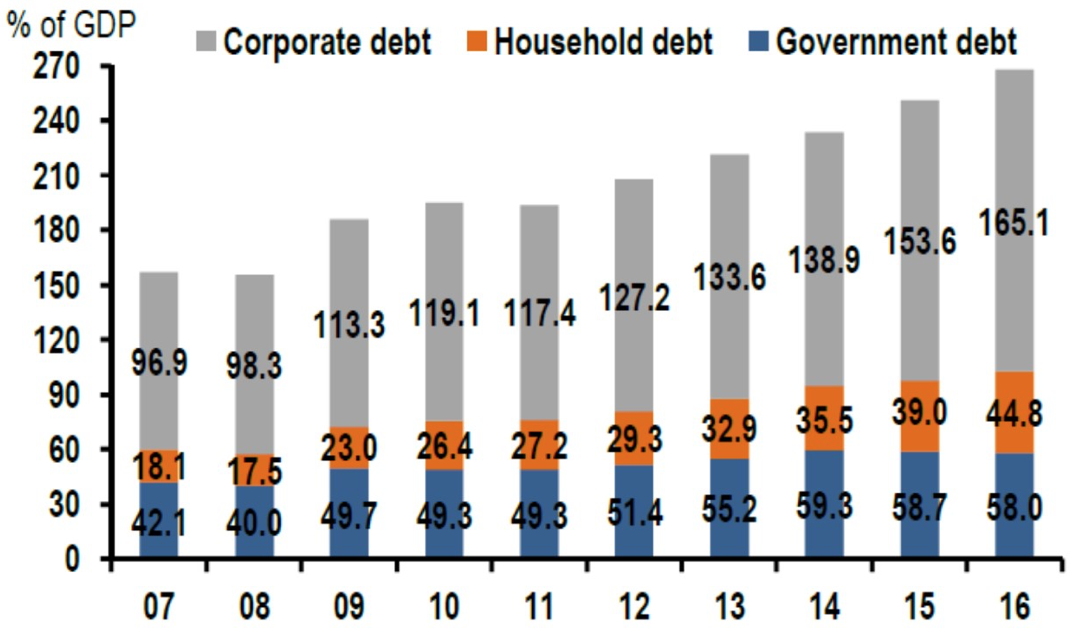 … and moving to span its economy outside

In late 2013, Chinese premier Xi Jinping announced two new investment and trade initiatives for China and the surrounding region: the “Silk Road Economic Belt” and the “Twenty-First-Century Maritime Silk Road,” together known as “One Belt, One Road” (McKinsey, 2016) (Chart 6). Investments in infrastructure therein – besides the acquisition of foreign assets elsewhere – may become a way to partially diversify China’s humongous foreign-exchange reserves out of low-interest-bearing U.S. and other foreign government securities. New markets for Chinese companies, such as high-speed rail firms, as well as for exporting some of the country’s vast excess capacity in cement, steel and other metals would follow.

More recently, Mr. Xi has also offered Latin American countries access to China’s “One Belt, One Road” initiative. Also, after U.S. President Donald Trump announced that his country would pull out of the Trans-Pacific Partnership (TPP) led by his predecessor President Obama, Premier Xi suggested the Regional Comprehensive Economic Partnership (RCEP) as an alternative, with seven of the 12 TPP members as potential members. 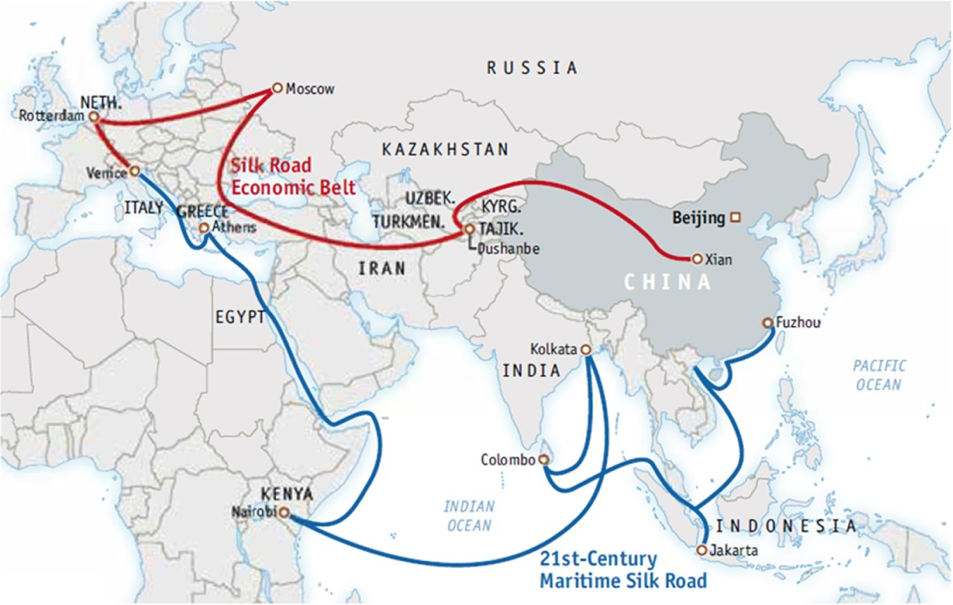 Trade and globalization will be moving along parallel, overlapping paths

The evolution of trade and globalization along the path stemming from new technologies, the rise of the services economy and the reshuffle of GVCs previously tackled here points to an increasing convenience of trade, investment and intellectual property rights agreements. Not by chance, former U.S. President Obama pushed forward attempts to conclude plurilateral agreements like TPP and an equivalent treaty with Europeans (the Transatlantic Trade Investment Partnership – TTIP). By sidelining China from both, pressure would be laid on it to accommodate and adapt its own policy and regulatory framework. Regardless of President Trump’s rebuttal of the TPP afterwards– and the fact that its package could have conceivably been unbundled and not necessarily taken as a whole – it contains an agenda convenient as a support to the new stage of globalization.

In parallel, “One Belt, One Road” may well constitute a new growth wave of Chinese exports and investments, giving a new life to the previous pattern of trade integration through its infrastructure build-out in many other countries, most of them in emerging markets. Prerequisites in terms of policy and regulatory harmonization would not be as high as the one embedded in TPP and TTIP.

In principle, now that potential crowding-out effects of TTP and TTIP on China are dismissed, both globalization processes may evolve in parallel, if the new globalization pattern can proceed in the absence of formal plurilateral agreements and the “One Belt, One Road” takes off at length. They might even reinforce each other through the channel of transmission of global growth if they succeed. That will depend, of course, on how far current anti-globalization backlashes manage to introduce sand in globalization wheels.