Relations between Morocco and sub-Saharan Africa: What is the potential for trade and foreign direct investment?

An analysis of trade relations between Morocco and sub-Saharan Africa indicates a growing volume of trade, reflecting a continuation of stimulated trade relations. A similar trend is observed in foreign direct investment (FDI), which has continued to grow in recent years, reflecting Morocco's determination to become a major player in the development of the African continent. This Policy Brief first presents trends in inter-regional trade between Morocco and sub-Saharan Africa, focusing on several indicators. Then it analyzes the evolution of the complementarity of Morocco’s exports with imports by its main sub-Saharan partners. Finally, it depicts Morocco's foreign direct investment in sub-Saharan Africa, focusing on the main recipients and the structure of Moroccan FDI.

Trade between Morocco and sub-Saharan Africa has been on an upward trend since 2009, with an annual growth of 12.8% between 2000 and 2015.1 However, sub-Saharan Africa’s share of Morocco's external trade remains low in comparison with its other partners, such as the European Union, or to a lesser extent the MENA region. Trade with the latter accounted for 56.7% and 15.3%, respectively, of Morocco's total trade in 2015, compared to only 3.4% with sub-Saharan Africa. This trend can be explained by the weakness of the African capital markets’ infrastructure, the non-application of trade protocols2 and the virtual absence of direct land or sea transport lines. This is also reflected by an indicator that integrates the notion of distance between countries in evaluating trade costs (Figure 1). It illustrates that the costs of trade with Africa are indeed very high.

In addition, Morocco has concluded numerous agreements with sub-Saharan African countries in the form of trade and tariff agreements, based on the Most Favored Nation (MFN) clause, or multilateral agreements.3 However, several of these agreements have not yet entered into force. Examples include multilateral conventions such as the draft trade and investment agreement with the West African Economic and Monetary Union (WAEMU) signed in 2008. Others are still under negotiation, such as the gradual establishment of free trade zones with the Economic Community of West African States (ECOWAS) and the Central African Economic and Monetary Community (CEMAC). These delays are therefore hindering the development of Morocco's trade with sub-Saharan Africa as well as intra-African trade on a large scale.

Furthermore, trade relations between Morocco and sub-Saharan Africa are asymmetrical as they tend to benefit Morocco more. This can be illustrated by its trade balance with the continent which has become a surplus since 2008. The balance reached $ 992.3 million in 2015 (equal to 1% of GDP), after having reached $ 1,091.5 million in 2014 and $ 981.5 million in 2013. On the other hand, while exports from Morocco to sub-Saharan Africa have been on an upward trend since 2009, imports have followed a downward trend initially between 2012 and 2014, rebounding in 2015, when it recorded a growth rate of 70%.

Figure 1 : Trade costs in % of export value between some African countries and Morocco (Average 2009 –2015) 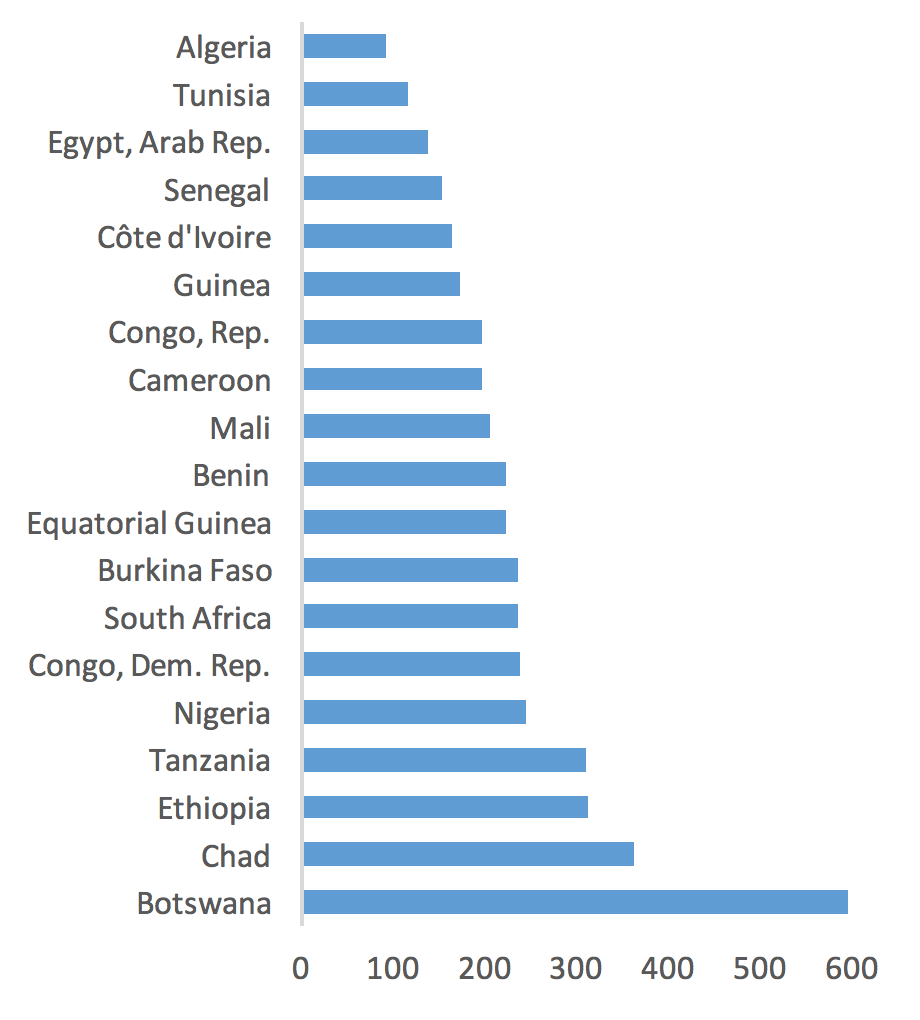 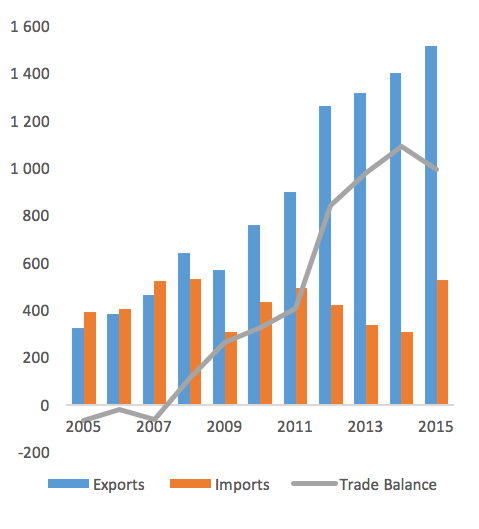 Another positive trend is the increase in the number of products that Morocco exports to sub-Saharan Africa: the Kingdom now exports about 187 products compared to only 83 products in 1995. Figure 3 also shows the evolution of the export concentration index from 1995 to 2014. This index Shows how exports (or imports) by individual countries or groups of countries are concentrated on a limited number of products or distributed more homogeneously across a range of products.4 It shows that the Moroccan export concentration index with sub-Saharan Africa alternates between periods of increase or decrease, with 3 peaks in 2001, 2004 and 2012. It is interesting to examine this index per partner country by focusing on Morocco's three main export partners in 20155: Ivory Coast, Senegal and Ethiopia.

Figure 3: Concentration index and number of products exported by Morocco to sub-Saharan Africa between 1995 and 2014 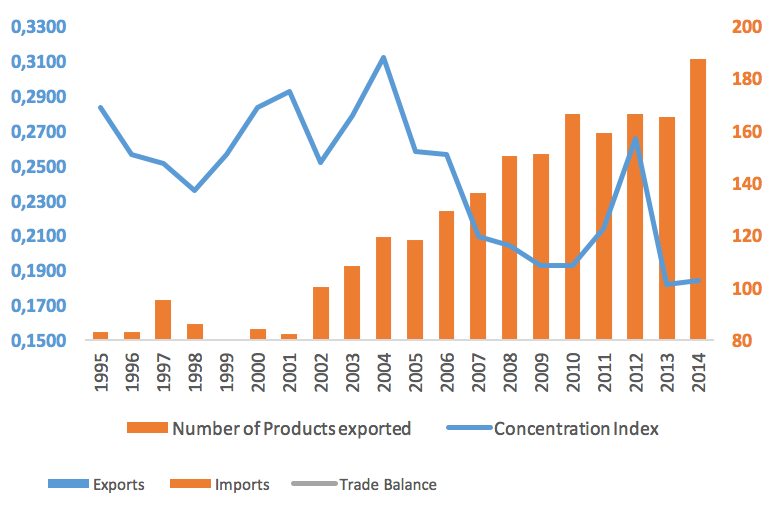 The bilateral concentration index for 2014 (Figure 4) show a very high concentration of Moroccan exports to Ethiopia. Indeed, knowing that Morocco exports only 5 products to this country, 96% of these are comprised of mineral or chemical fertilizers. Although exports to Senegal and Ivory Coast are less concentrated or more diversified than those to Ethiopia, the index remains fairly high at a value of 0.4 and 0.3 respectively. Similarly, mineral or chemical fertilizers account for almost a third of Moroccan exports to these two countries (24% and 23% respectively).

Figure 4: Index of bilateral concentration of exports between Morocco and sub-Saharan Africa 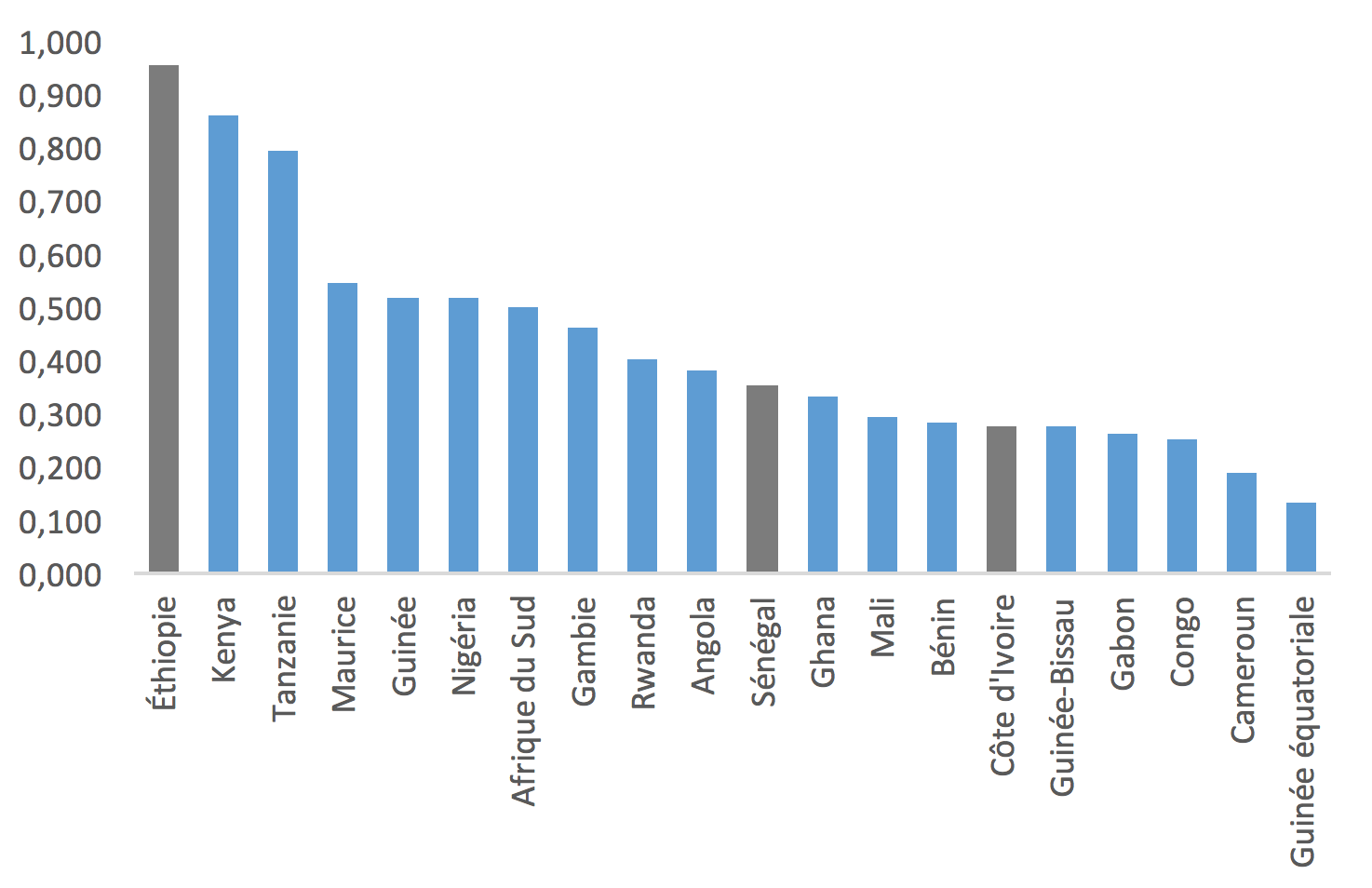 The complementarity index is a relevant trade indicator that indicates the extent to which the export structure of a country X corresponds to the import structure of country Y, the country X's trade partner. In other words, it helps to determine whether two countries are natural trading partners.8 A high index between two trading partners indicates that these countries would benefit from intensifying trade by, for example, establishing preferential trade agreements. Figure 5 shows the relationship between the complementarity index of Morocco, as an exporting country, and the sub-Saharan African countries as importers, relative to the nominal GDP of these countries for 2013 and 2015, focusing on the Kingdom's three main export partners.

Figure 5: Moroccan exports to Africa by country and complementarity Index, in 2013 and 2015 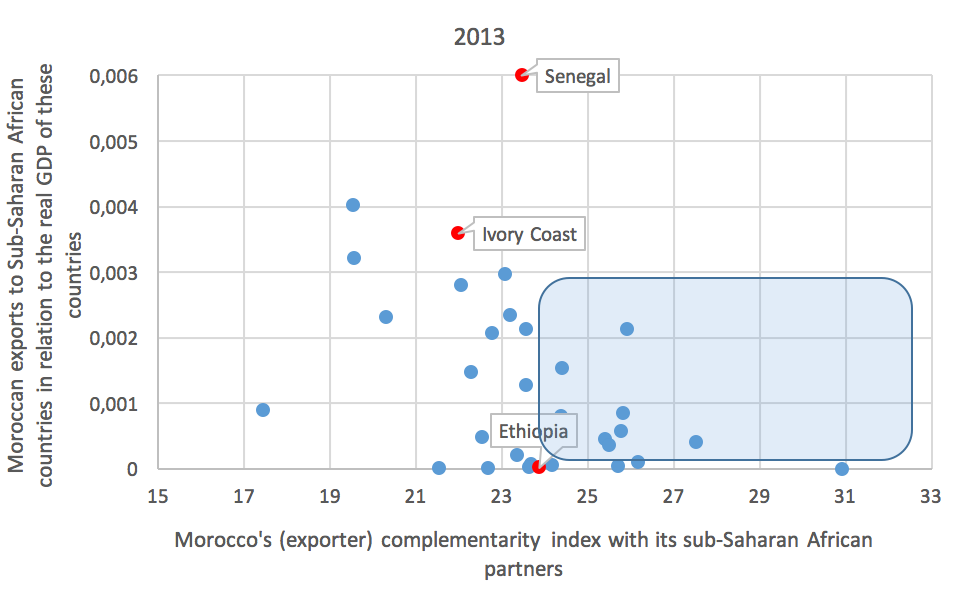 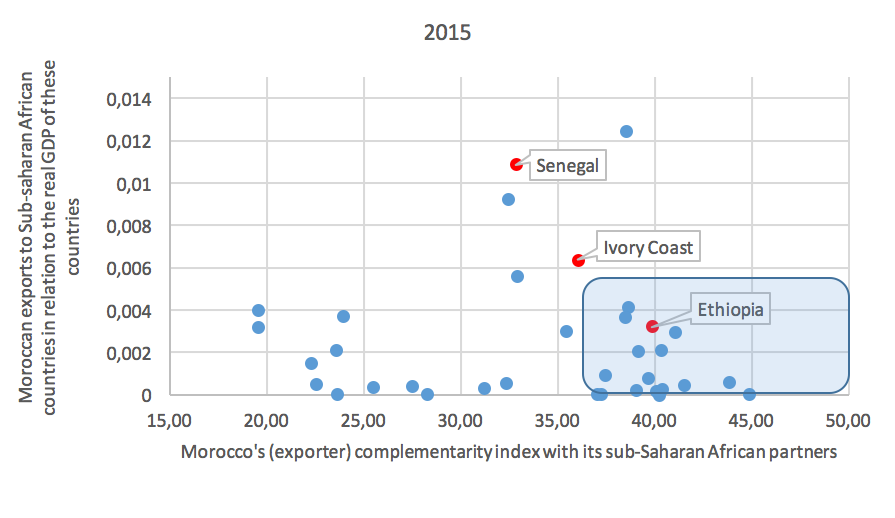 Source: Author’s calculations based on data from UNCTAD and WITS

The first observation is that in both 2013 and 2015 the Kingdom capitalized on its trade potential with Senegal, and to a certain extent Ivory Coast, more than with countries with a higher complementarity index. In other words, Morocco exports more to these two countries than to those with whom it has a higher index of complementarity.9 Furthermore, the volume of exports from Morocco to Senegal has remained virtually unchanged, while the volume of exports to Ivory Coast improved during the two years studied.

Morocco's trade potential with its main partners therefore exists and is relatively well leveraged. It must now be consolidated through appropriate mechanisms and by targeting the branches and sectors that Morocco can export to its sub-Saharan partners while maximizing its trade complementarity in order to better meet the import demand from these countries.

Morocco was the third destination for foreign direct investment (FDI) in Africa in 2014,10 achieving 52.3% growth in new projects compared to the previous year. In 2015, it ranked second in the AAI (Africa Attractiveness Index)11 developed by the financial audit firm EY, just behind South Africa, reflecting its relatively business-friendly environment and good infrastructure, which attracts foreign investors. The French companies have surpassed their Spanish rivals to become the main direct foreign investors in Morocco. FDI in Morocco is diversified and focuses on the services sector, particularly financial services, as well as the manufacturing sector.

Although the difference between incoming and outgoing FDI flows from Morocco is considerable,12 recent data indicate a growing trend of outward investment. For example, the share of outward FDI stocks of GDP rose from 3.8% in 2014 to 4.4% in 2015.13 Much of this flow goes to sub-Saharan Africa. In recent years, Morocco has become a more active investor in this part of the continent. In 2015, 40% of Moroccan FDI was made in sub-Saharan Africa (Figure 6),14 thus positioning it as one of the most important countries investing in the continent, behind Kenya, South Africa and Nigeria.15 This trend also reflects the scale of intra-African investment. Indeed, African investors have almost tripled their share of FDI projects over the past decade, from 8% in 2003 to 22.8% in 2013. This growth is fueled by the need to improve value chains and strengthen regional integration. Another growth factor is the understanding that African investors, especially Moroccans, have potential market opportunities and challenges.

Figure 6: Evolution of outward FDI flows from Morocco toward sub-Saharan Africa and the rest of the world, as a percentage of total outward FDI between 2011 and 2015 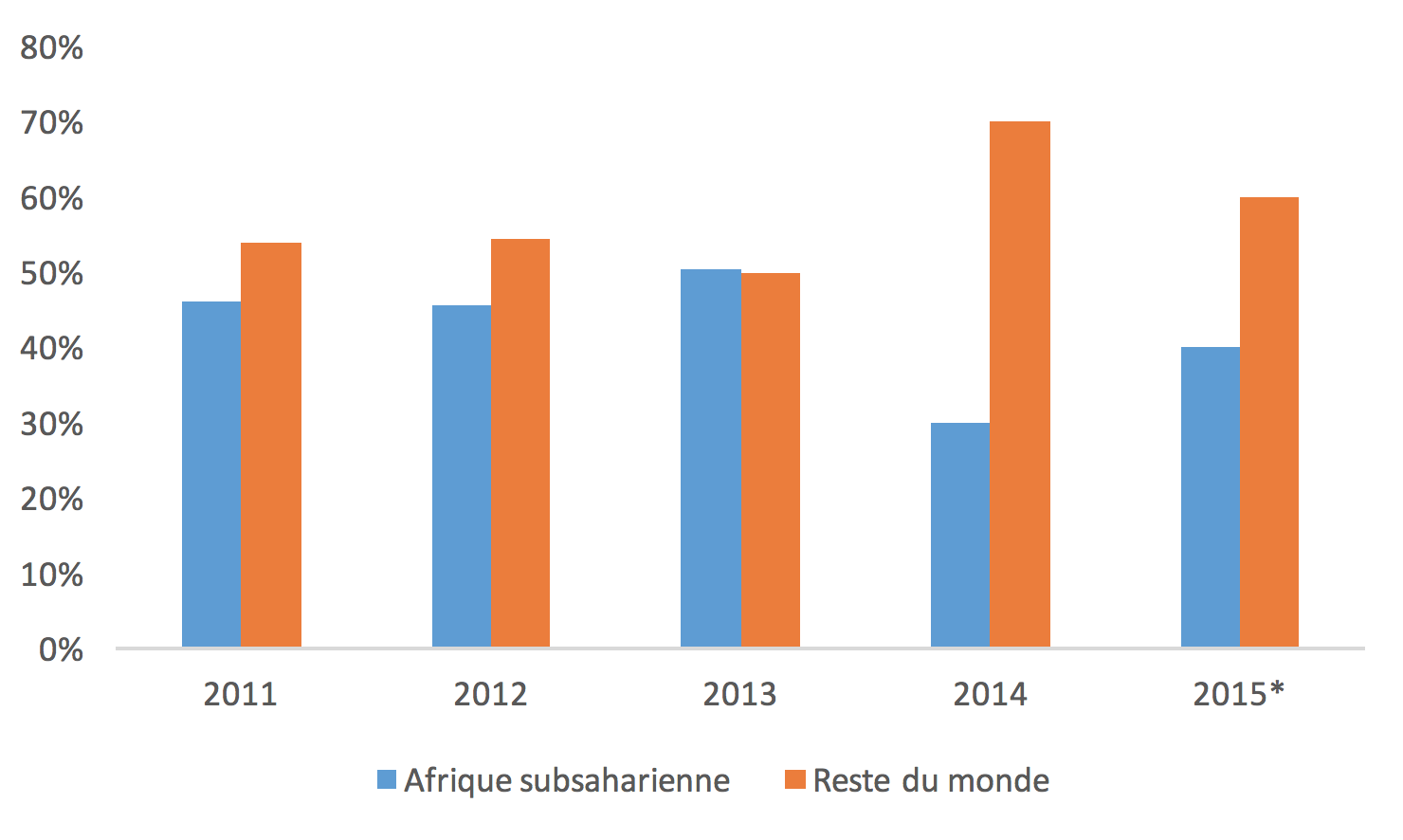 Moreover, the acceleration of Moroccan FDI in sub-Saharan Africa can be explained by the relaxation of investment regulations. Moroccan operators have increased facilities to seize more opportunities abroad, thanks to two main measures:

- "In August 2014, the liberalization of investment abroad of up to a maximum of MAD 30 million per year for legal entities with at least three years of activity, provided that the company's accounts are certified by an external auditor and that the proposed investment directly relates to the entity’s business activity;

- The December 2015 increase in the transferable amount for investment abroad to a ceiling of MAD 100 million for Africa and MAD 50 million for other continents. Additionally, a MAD 200 million fund has been created in order to strengthen the presence of private Moroccan operators in the African market."16

Between 2011 and 2015, Ivory Coast, Mauritius and Mali were the top three Moroccan FDI recipients (Figure 7). In 2015, the top five Moroccan FDI countries were Mauritius, Ivory Coast, Nigeria, Senegal and Mauritania. The reciprocal promotion and investment protection (APPI) agreements with Gabon, Mauritania and Sudan, as well as the recently signed double taxation agreement with Gabon and Senegal, are expected to stimulate further Moroccan investment in these countries.

Figure 7: Distribution of Moroccan FDI flows in sub-Saharan Africa between 2011 and 2015 by country, in percentage 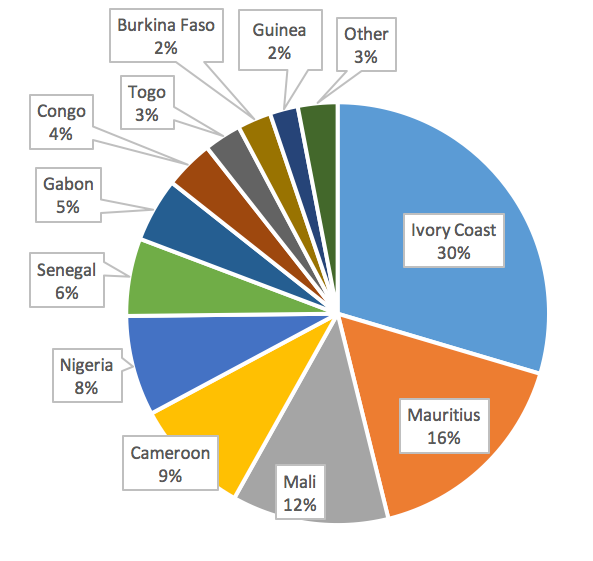 Moroccan investments in sub-Saharan Africa mainly focus on sectors with high added value, such as banking, telecommunications or industrial sectors, and are conducted by companies / banks such as Maroc Télécom, Attijariwafa Bank, BMCE, BCP and RAM. Figure 8 illustrates the distribution of Moroccan FDI per sector in 2011 and 2015. It should be noted that the banking sector remains the main recipient of FDI. The telecommunication sector share rose from 9% in 2011 to 21% in 2015, taking second place, while that of the industrial sector decreased from 22% to 12% between the two years in question. FDI in the real estate sector has grown significantly, increasing from 2% to 11%, putting it in fourth place.

Figure 8 : Distribution of Moroccan FDI flows in sub-Saharan Africa in 2011 and 2015, in percentage 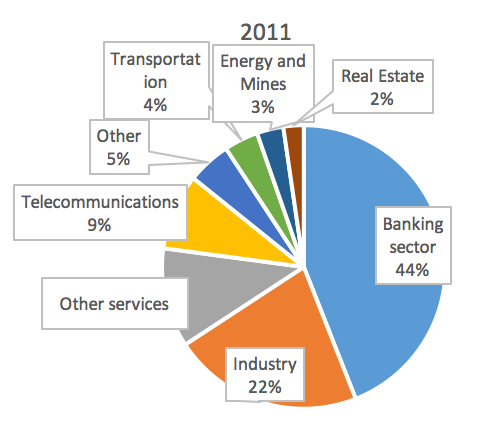 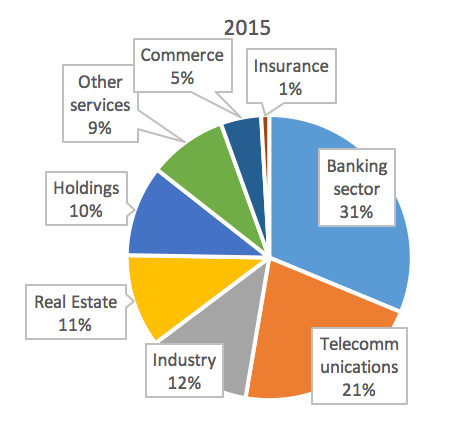 Moroccan FDI to sub-Saharan Africa is expected to continue its upward trend in the coming years, given Morocco's commitment to strengthening its relations with the Southern countries, as well as macroeconomic stability and strong economic growth within the African continent during the last few years. This would benefit both Morocco and its partners in terms of trade and economic cooperation.

There is no doubt that there is enormous trade and investment potential that should be explored and developed between Morocco and the sub-Saharan Africa countries. Several recommendations are worth highlighting.

With regard to trade, a more dynamic approach to partnerships and agreements is needed. In this sense, strengthening the regulatory framework governing trade relations between the two parties is a priority. They should therefore work jointly to accelerate the implementation of free trade agreements with WAEMU, ECOWAS and CEMAC, as well as establish bodies responsible for monitoring protocols and trade agreements.

In addition, transport costs between Morocco and its sub-Saharan partners may hinder the development of their trade relations despite the signing of free trade agreements. Transport costs in Africa are among the highest. As a result, there is an urgent need to strengthen the transport and connection infrastructure with the aim of unlocking the trade potential between Morocco and sub-Saharan Africa.

Regarding Morocco’s FDI in its sub-Saharan neighbors, an inclusive approach is needed to link these investments with the economies of the recipient countries and direct them to sectors where they can boost domestic investment, create jobs and catalyze productive capacity in order to foster Morocco's regional integration with the rest of Africa. Moreover, the participation of Moroccan expertise in supporting its investment projects would positively impact the know-how and technology in the host countries.